Here on Smartlabs.cz you will mostly see interviews in Czech language with strength athletes from Czech republic and Slovakia. In past we've had few interviews with world class powerlifters like Carl Yngvar Christensen or Marte Elverum. It's been a long time but opportunity presented itself and it's my pleasure to share with you an interview with one of the strongest men, best weightlifters and best squatters on this planet. Here's English version of interview with 27 years old Estonian Mart Seim. Czech version coming in few days.

Mart, thank you in advance for your time you dedicate to this interview. Let me start this interview with a question regarding IWF Worlds 2017. In your last clean and jerk attempt you had to go against heavy ass barbell - 253kg - and also against Iranian fans who were absolutely unsportsmanlike. How tough was it?

Thank you very much. It was a distraction, of course, and it reminded me of Rio, but I knew that I'm in better shape now, plus it was the third and decisive attempt. If I have the medal within my reach, I generally perform better.

In Czech republic we have national team with athletes who are employed by our government and work as professional athletes. What support do you get in Estonia as one of the world's best weightlifters?

The most support I get comes from sponsors I have and also from Eastonian Olympic committee.

We have like 4 categories (let's say A, B, C and D) and you get money based on what category you are in. A - medals from Olympic Games and World championships. B - top 8 at Worlds and Olympics. C - athlete who is just below this level. D would be even lower level When you are in A category you get the most money. B is less. C is less than B. D is less than C. A category allows you to be real professional athlete. B would be like basic salary and you would use half of that money for food, especially in my case.

I need those money from sponsors because my trip to Worlds with team costs around 10k €. I have to take fysio with me. Without sponsors this would be impossible.

Can you say you are professional athlete or do you have to support yourself with other work?

Yep. I am professional. I would would do other work besides training in the gym my results would go down. Even if you stay on your feet or just walk somewhere it takes it's toll and your legs are weaker. 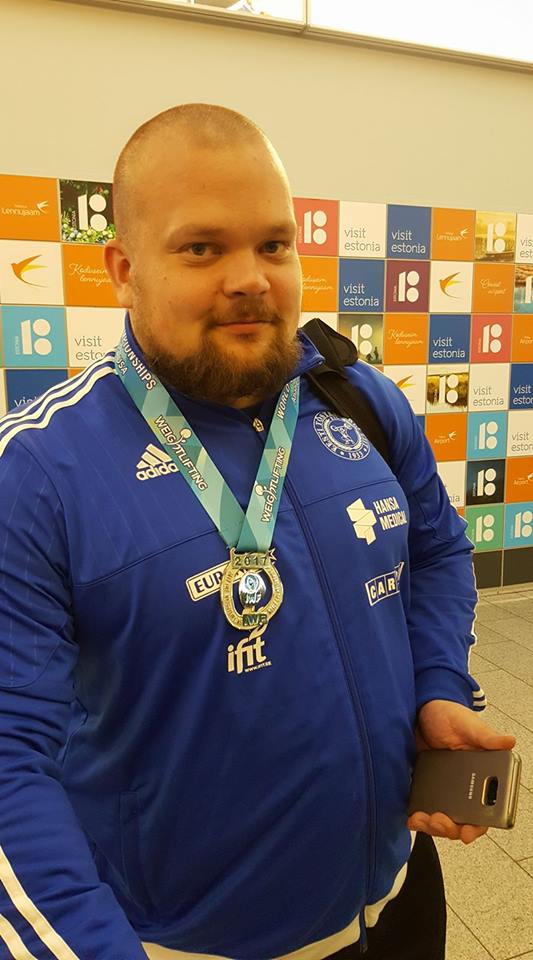 How big is weightlifting in Eastonia? Are people interested in it? Do you have young athletes coming in with inspiration being really great one day? There are probably 100 people who competed at our shows this past year altogether. At Estonian nationals there were like 30 weightlifters. So the sport itself is not very popular. In past we have had some good athletes but they did not do much to promote the sport.

We had one really good lifter in 70s. He was really good. But certain person contacted organizers of the contest saying that this athlete faked his medical pass. So athlete was not allowed to compete. And stuff like that prevented weightlifting from getting bigger here in Estonia. Hopefully better times are ahead of us.

Very cool! Do you go to tv shows too or hang out with other athletes?

I usually decline when I am asked. I want to put focus on the right things. And it also takes lots of energy. Hanging out takes energy. It's like in the gym. If you are in the gym you are there to put in hard work and train. 100% energy has to go towards training. But I can also talk to people once I am there. Outside the gym it's time to recover. No hanging out and wasting energy that way.

Haha, love this answer about too much energy fr. At Worlds you weighed in at 158 kilos. How hard is it for you to keep your weight? What did you eat today for example?

At Europeans I weighed in 149 kilos or so. Month before the competition I was 143 kilos. And after the competition I had flu and lost weight. I was probably 142 kilos at that time. Being in training camp really helps with keeping my weight up. I only train, sleep and eat. I dont waste energy elsewhere. Now I am where I want to be. And what I eat? Oooooooh let me tell you about what I ate. I ate lots of different meals like this one. And oh yeah I cooked this. This is my favorite. Unfortunately it takes too much time to cook this.

During day I focus on eating 450-500g of protein a day. Half of that comes from protein powder. I try to portion my meals by 1/3 for protein, 1/3 for vegetables and green stuff and 1/3 for cabrs. And let me tell you it ain't easy.

What are your favorite cheat meals? I bet you have some Estonian food I never heard of.

I have something every day. You cannot weigh this much without eating something people call cheat meal. Even pasta is cheat meal for some people. Burgers are probably my favorite. If you eat good burger you get everything you really need.

My secret source told me you are big Burger lover. And you actually used burger as your power meal before World championships in Anaheim. How much did you enjoy burgers in USA?

Haha, secret source. Yep that's truth. I had to. Hotel food was really below any acceptable level. And when I think about it I felt really good before competition after eating big burger. I should remember that for my next competition. Haha.

It was not mcdonalds burger. I stayed in fancy Marriott Hotel before the competition and ordered it from restaurant there.

Where do you train, Mart?

I train in the biggest gym in Estonia. It's called Sparta. All big athletes train there. Football players, volleyball, wrestling,... all sports.

We have 6 weightlifting platforms there and it's only 5% of the gym. So it's really big gym with many great athletes.

One of the biggest topics of 2017 was 12 1-year ban from international competition to 9 countries with 3+ Positive doping tests from Retests. What did you think about this decision?

Well, I think it's too soft. Some big countries use drugs systematically and they feel like they cannot be stopped so they can whistle to these rules. In my opinion any country with 2 or more positives should be punished more harshly. Especially if some countries can get ahead on doping testing as it stands right now. If you get caught from retest it should result in lifetime ban and end athlete's career. And country (s)he is from should get more than 1 year penalty.

Let's finally talk about your lifts. What are all your personal bests you can remember even if it's not from competition but in gym sessionas well? Snatch with straps 195kg. In competition 191kg. In training without straps 175kg. Clean and jerk in training 240kg. Jerk 255. Pause jerk 250kg. Strict press 170kg and also 8 reps with 150kg. I believe I can do 180kg easily if I focus on it for a while. Pause push press I hit today 205kg. Normal bench press 210kg long time ago. Soon i go up because shoulders are stronger. I also did 200 for 3 reps. I can do that usually with 2 weeks of training. Snatch grip deadlift 310. Normal deadlift I haven't tried.

How much fun was it for you to train for that 400 and "squats of ten world record"? And how satisfying it was to hit it?

I was much weaker compared to now. It was all about motivation. 400 gave me good challenge. 400 came after just few weeks of focusing on squats. 320 for 10 felt really good and satisfying knowing that I am the only one who have done that without steroids. I believe 400kg was done before by clean athlete.

Strongman does not count. They are not tested and with supplements they use they should be doing 400kg for 10 reps.

Will you try to set some crazy squat record in powerlifting competition?

I will but after I am done with my career as a weightlifter. Right now I am just starting to get on that high level. I am 27 years old and I plan on competing at 3 more Olympic Games. Only if weightlifting stays there of course.

For squat you used russian routine, right? May I put it in interview?

Yop, I did. I used it until I hit 400kg. At that point 80% was just too much. Too much for knees. Before that it worked really well. Right now I cannot share my routine with you. It really depends on how I feel day-to-day. It changes a lot. 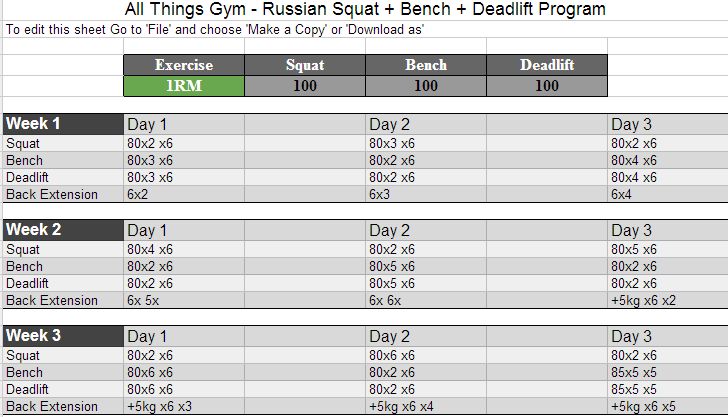 Nope. I dont focus on squat records. I will do over 400kg when I feel like it's a good day for it.

How has your training changed since you started? Do you do different exercises now? More or less volume?

In the beginning I trained six times a week, leaving only Sundays off, doing seven exercises on average each time. The number of exercises has gone down every year and I do more of the classic lifts and pulls. I never do more than four exercises per training session any more. How often do you squat or deadlift or press? How many reps and sets of each do you do? I do squats three times a week, 1 x front squat and 2 x back squat, but I do sets only once a week, in other trainings I just go up and do one set of 3, for example. But since the weights are relatively heavy already, the Russian squat routine isn't an option any more (with 300+kg weights), as it puts too much pressure on the the knees. I don't do deadlifts, I only do the classic pulling and pressing twice a week.

I remember watching video of you doing jump training. Do you still use this method?

For sure. Every weightlifter does these I guess. You do them do gain more explosiveness so that's why I do them. I dont do them too often to save my knees.

I perform then jumping on steps or on high box.

Who are some of your favourite weightlifters ever?

For example, Iranian Hossein Rezazadeh, for being so incredibly strong, and miles and miles ahead of me still. All the inspiring weightlifters from the early 2000s who made any videos of their accomplishments. Youtube videos in general gave me a lot of motivation. And Klokov, of course, who has done so much for weightlifting, and been an inspiration for me personally as well.

What shows are you plan on doing and how much kilos can be expect? I plan on competing at European and Worlds this year. At Worlds I want to be in my top form. I know how hard it is to peaking for two competitions in one year so for Europeans I dont put any pressure on myself. Pressure is on only for Worlds. Interview is at it's end.

Is there a messege you would like to share with weightlifting fans from all over the world, not just Czech republic and Estonia?

I am not good at these kind of things but I wanna wish everyone happy new year and hopefully it brings us many great news and the sport will get cleaner.

Video and photo credits go to https://www.allthingsgym.com/ - number one source for any weightlifting fan